Keeping the old blog going this time, is a group of goblins from Four A Miniatures.

Got these at a Hammerhead show some years back (when it was still at Kelham Hall), but they're one of those little projects that took ages to get started! They're such brilliant little miniatures though, I wish I'd painted them sooner.

Continuing my little side project, I present to you the next in the series...Droog Warfiend!

Bit of a silly name, but a fierce champion of chaos nonetheless.

This one was slightly easier than Kyrax Doomquake, since most of the model is bone armour over plain black. However, the sword was tricky to get the red and the black to blend together properly, and I still don't think it's quite right. And his face definately isn't as close to the card as it should be, but it's the best I could manage!

The only other thing is his shield. Currently, it's actually blank, as I have absolutely no idea what's on it! If anyone has a picture of his shield design, I'd love to see it so I can complete the model properly.

In my first post about Combat Cards (here), I talked about the cards and showed the two miniatures I'd painted to match the models on the cards. In this post, I present the third of my homages to these classic miniatures.

The card:
And my tribute:

This was a challenging model to paint, because the blue was a strange shade that I didn't have, I ended up mixing a little purple into a light blue to get it. The white was tricky (as white always is), and the odd shade of purple for the shield rim took some experimenting to get right. The shield design itself wasn't as tricky as I thought it would be, although the design itself is not something I would ever have be able to create!
Posted by Ninja-for-Hire at 21:37 2 comments:

I've finally completed a couple of terrain pieces I've been working on, and it's now time to blog about it!

As I've said before, I think terrain is as important to a wargame as the miniatures, rules and players. For me, games with crap terrain (or, horror, no terrain at all!) lose all immersion. I find it difficult to enjoy a game if the battlefield looks rubbish, which is why whenever I play a game, I like to be the player that sets up the table!

Anyway, first up, the watchtower that's taken the best part of 5 months to build. 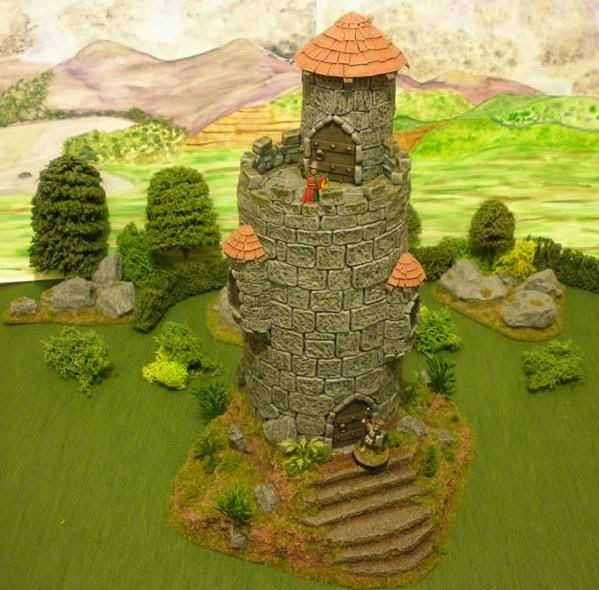 A few shots showing the tower from other angles:


The tower is made from various cardboard tubes on a base of MDF and polystyrene. The brickwork is actual individual bricks (well, tiles really) formed from air-drying clay pressed to the card. This process took AGES! At regular intervals I pasted some slightly watered down PVA glue between the brick-tiles in order to help them stick to the card a bit better.You can see the work-in-progress here: 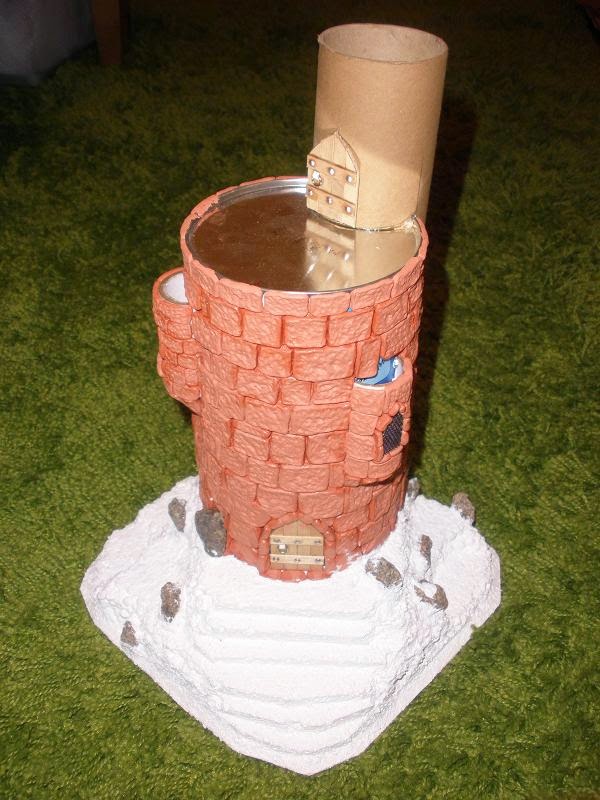 This next piece took almost as long, it's a woodland pond. It's the first time I've used Realistic Water (from Woodland Scenics), but it's turned out better than I expected. The water itself took about three weeks of pouring and curing very thin layers of the product, even though the final depth is only about 1cm! I might have got away with pouring slightly deeper layers, but as this was the first time with this stuff, I played it safe. 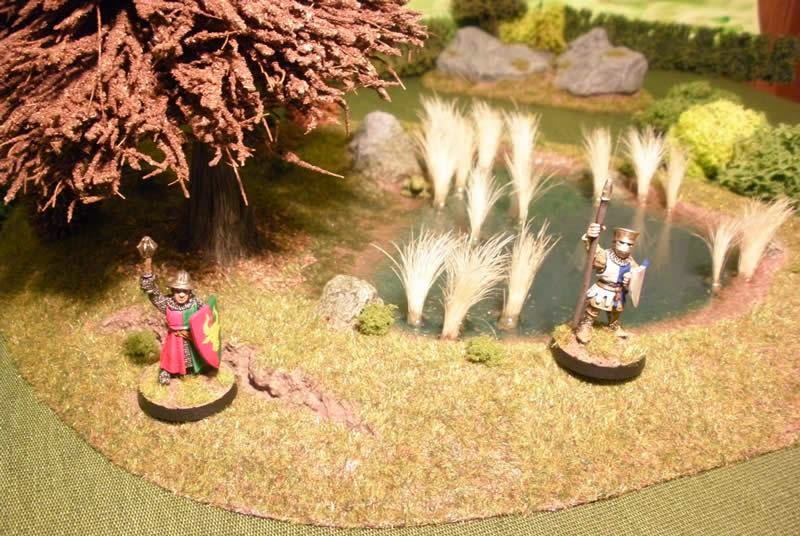 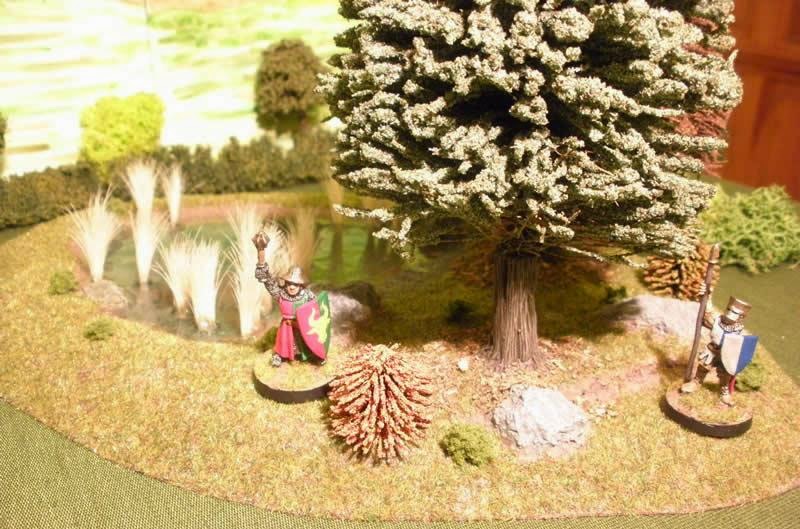 Finally, this is something I made a few years ago, but it goes with the fantasy terrain theme. Some Orc Huts! 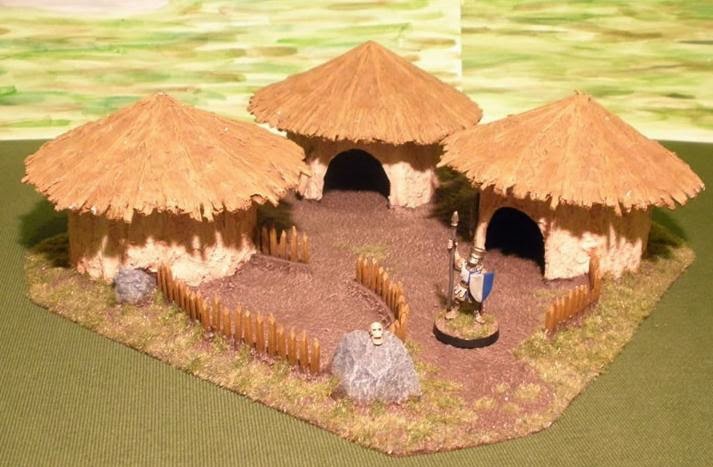 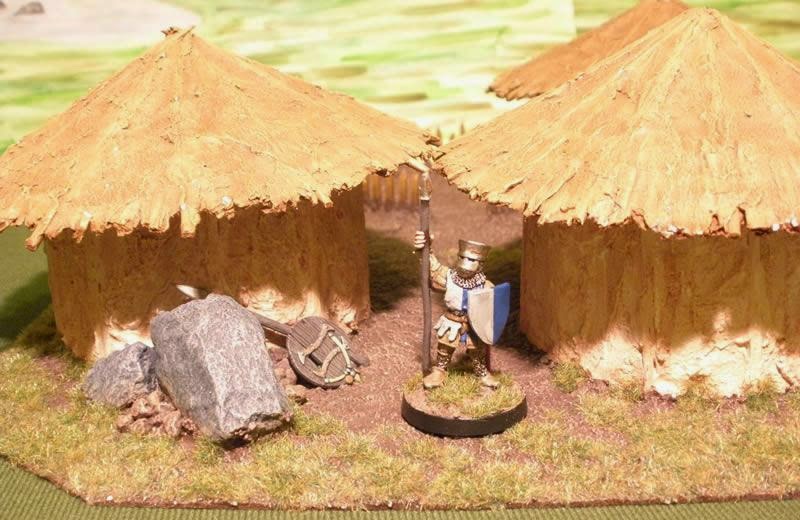 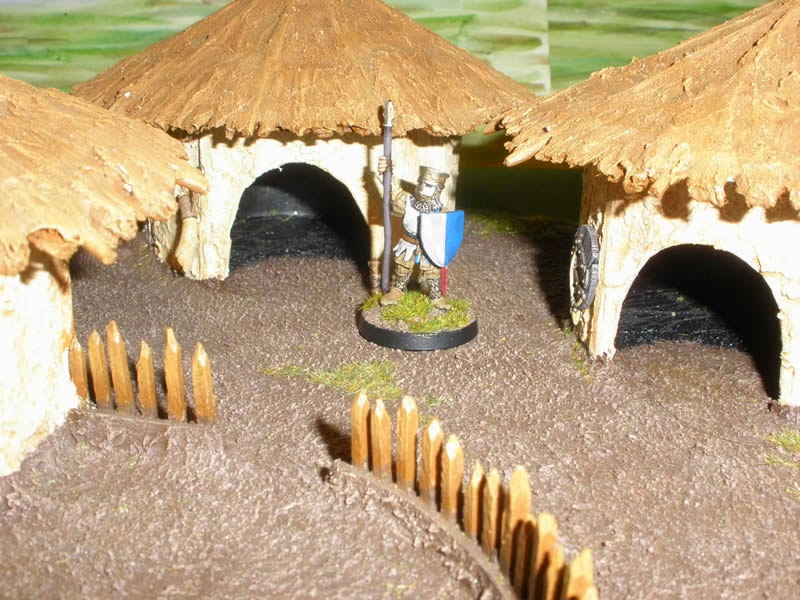 These were made from slices of pringles tubes with cardboard roofs covered in filler. The fences are just matchsticks. I also added a few items from the plastic GW beastmen kit to finish.
Sadly I don't have any Orcs to actually inhabit them yet, but maybe one day!

As well as the Rogue Trader stuff and terrain building I've done, I have also been steadily creating a collection of miniatures for fantasy games. I already have sizable Chaos, Beastmen and Undead armies from way back in my Warhammer days, so I have plenty of "evil" units, but I have very little in the way of "good guys". I.e. men, elves, dwarfs, etc. At some point in the future, I hope (it's a very faint hope, but it's there!) to play a proper Warhammer Siege game, and I'll need some valiant fortress defenders. So I'm creating a few small units of Old Worlders for that purpose. Although they may well see some action in some skirmish games before then.

These are all old ex-Citadel 'Feudals' from that I've bought from Wargames Foundry whenever I've seen them at shows (like Triples).

Hopefully be grabbing another pack of these later to make a couple of decent sized units.

Again, I need quite a few more to have enough for some full infantry units. 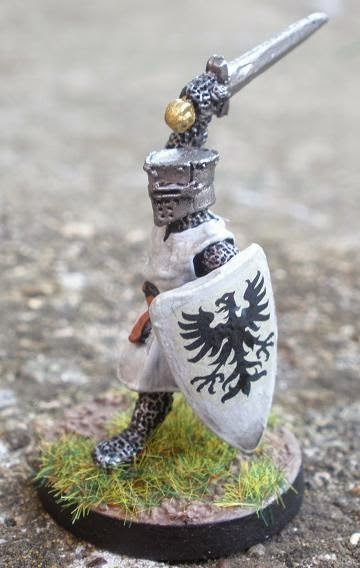 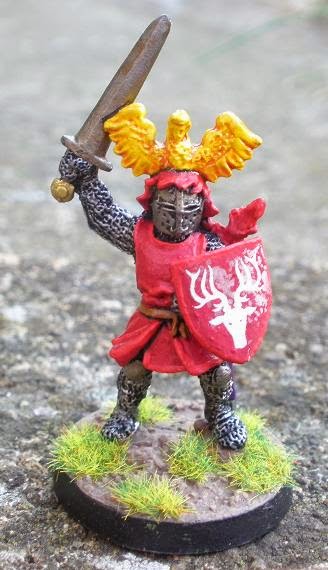 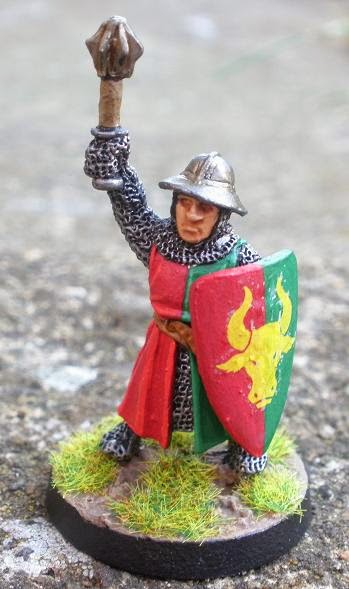 These would probably be used as unit leaders I think, in the infantry units.

I also have some men-at-arms with spears and shields and a pack of armed peasants that are currently being painted up to add to these.Still, I think it'll be quite a while yet until I have enough valiant defenders of men to take on the forces of evil!
Posted by Ninja-for-Hire at 22:50 3 comments:

Depite not blogging much recently, I have still been painting and whatnot. Some sci-fi, some fantasy, some terrain building (such as in my last post). I've been trying to build up a selection of minatures so that I have a greater variety of things to use when thinking up scenarios.

To that end, may I present the following!

I've currently painted up four dinosaur models, they're all plastic toys sourced from various shops and museums. Although I've put a space marine in each picture for scale, the size of dinosaurs is largely irrelevent (as long as they're bigger than the average humanoid, it'll do!).
Next I've put together a couple of Robots. Now I'm very fussy when it comes to Rogue Trader robots. I don't actually like the original RT robot miniatures that much, but then I discovered some old Battletech: Dark Age clix miniatures in the back of an old cupboard at my mum's house. And immediately I saw an opportunity to convert some Imperial Robots out of them. The painting is complete, but I'm intending to add some transfers to the flat areas to add some visual detail. 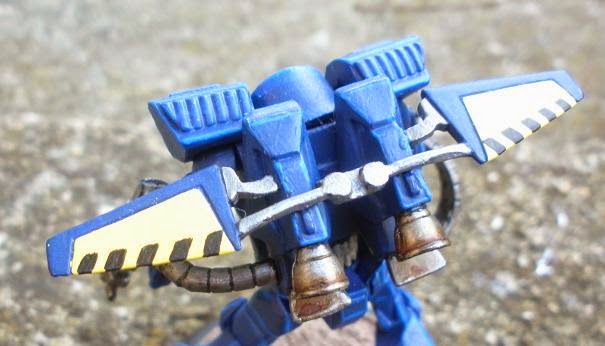 Although they're already a good scale, I rebased them and removed most of the original weapons from these Battletech mechs, then added some more familiar 40k weaponry. I think this helps to put them into the correct setting, rather than just looking like Battletech miniatures 'proxying' as RT robots.


Some months ago (and I swear this is true) I arrived at work to find a bag of genestealers on my desk, left there by one of my colleagues who knew I collected miniatures. Inside was a mix of classic genestealers (from Space Crusade and original Space Hulk) and some of the newer 'stealer designs from the current Tyranid range. So I've painted up a few of the classics as adversaries for my RT Imperial forces.
Finally, a Space Ork Raider. 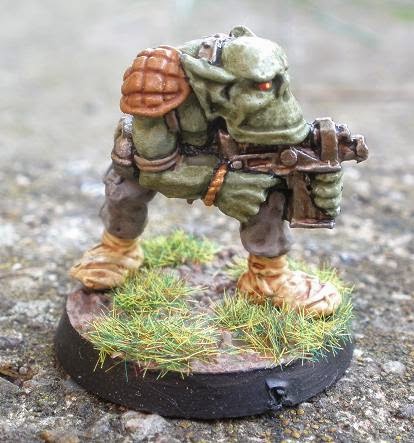 Nothing much else to say about him, other than he is the first painted one of many more to come.
:)
Posted by Ninja-for-Hire at 22:56 5 comments:

Terrain. Something often neglected in wargaming. True, not everyone has the skill, time or desire to make it, and yes, you can buy some phenominally good (albeit expensive) tabletop terrain these days. That said, I do still believe that the best terrain is stuff you've made yourself.

Regardless of your budget and skill level, you can make some useable terrain for your battlefields. Even the example terrain in the original Rogue Trader rulebook was little more than cork tile, some garden rocks and a few blobs of plasticine!

But I'm not here to instruct you on how to make wargames terrain (I'll leave that to the professionals!), I'm just going to show you some of the terrain I've built recently for fantasy era games.

First up, a village well and some boulders;
The well was simply made from some 'bricks' of modelling clay formed into a circle, the frame is just wooden dowel and the tiles are bits of cardboard trimmed into shape. Plus a bit of chain.
The boulders are, well, rocks. These were 'liberated' from the carpark at work, glue-gunned to a piece of mdf and painted.

Next is two Empire style houses I made, which now form part of my local club's terrain collection. They were experiments really, and I intend to build some new ones for myself using the experience I gained from making these. They're just made from shapes of cardboard (glue-gunned together), with lengths of wood (coffee stirrers, looted from various coffee shops) glued on. The walls were then covered in a layer of all purpose filler. Like for the well, the tiles are squares of cardboard with 'chips' cut into them.

Then we have a more complex piece, which is the town blacksmith's. Because of its open plan design, I couldn't make it from cardboard, so I had to build a wooden frame with wooden flooring, onto which I added a roof. The forge, bellows and anvil were made separately and then glued in.
I'm thinking of adding more detailing, such as finished weapons and armour lying around, some work benches and some signs hanging outside.

Finally, I have this. 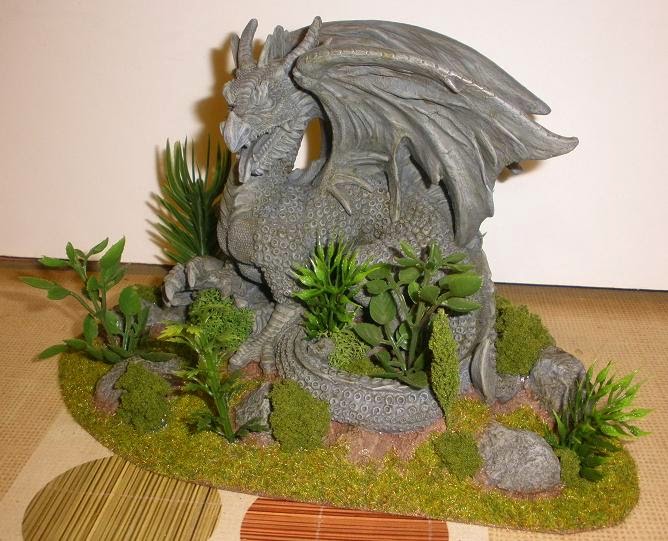 This was formerly a resin dragon figurine of some description (of the kind you'd find in random gift shops), which my girlfriend had kept on a shelf for years gathering dust, and was throwing out. So I glued it to a piece of mdf and added some modelling clay and textured paint around the edge to blend it into the base. Then I painted it, added static grass and glued in some additional foliage to try and give it that overgrown look. I think of it as being some sort of ancient monument or shrine, deep in the wilderness and long forgotten.

So, that's a brief look at some of the terrain I've been building in recent times. Hopefully more soon.

Ninja-for-Hire
I am a gamer, geek and casual Kung Fu student. I love tabletop games, my Xbox, my PC, sci-fi and fantasy films/TV, miniatures painting and terrain building.